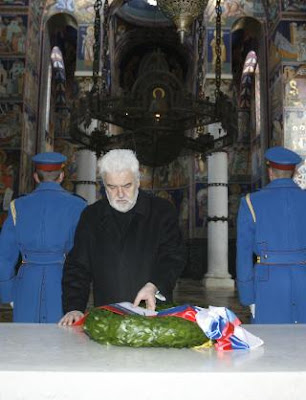 Mirko Cvetkovic, Prime Minister of Serbia
TOPOLA - Serbian Prime Minister Mirko Cvetkovic laid on Wednesday laurel wreaths on Oplenac Hill (central Serbia) with high state and military honours, thus paying tribute to Karadjordje, leader of the First Serbian Uprising and the first ruler of restored Serbia.
On behalf of the Serbian government, Cvetkovic laid wreaths at Karadjordje's grave in St George Church on Oplenac Hill.
On that occasion, the prime minister congratulated Serbia's Statehood Day to all citizens, pointing to the importance of Ferbuary 15, which has been celebrated as a national holiday since 2001.
“My address here is aimed at underlining the importance of this holiday, and I am of the opinion that a majority of Serbian citizens, and possibly all of them will gradually accept February 15 as Serbia's Statehood Day," Cvetkovic replied to a journalist's question as to whether he thinks that the majority of Serbian citizens celebrates Sretenje as a national holiday.
Cvetkovic recalled that on February 15, two major historical events took place, the decision on the First Serbian Uprising at Maricevic's gully in Orasac in 1804, and the passage of the Sretenje Constitution in 1835.
"On one side the fight for freedom, and on the other- the constitution. These are two key moments for a country's statehood, and in Serbia's case, these two events happened on the same date. I am of the opinion that it is of immense importance to place much more emphasis on the date,“ Cvetkovic said.
Today we celebrate dignity and self-respect
ORASAC - Serbia's Statehood Day and 208th anniversary of the First Serbian Uprising were marked on Wednesday at Maricevic's gully near Orasac (central Serbia), from where Grand Leader Karadjordje started the fight for the final liberation from the Ottoman Empire.
On behalf of the Serbian government, Minister of Culture, Media and Information Society Predrag Markovic laid wreaths at the site, underlining that on this day, Serbia celebrates dignity and self-respect.
Markovic recalled historical facts related to the fight of Serbian people against Ottoman rule at the beginning of 19th century, and underlined the importance of the Sretenje Constitution that was passed in 1835.
He said that at the moment, Serbia made a decision to be a part of European civilisation.
Markovic said that Serbia reached the decision, although “many in Europe did not think that Serbia should get a modern constitution and parliamentary democracy.”
"At that moment, Serbia demonstrated determination - and that is what we celebrate today,” Markovic.
The minister underlined that the national holiday should help us secure the state whose institutions cherish the values, but that individuals who have and recognize these values play a major role in that.
http://www.tanjug.rs/news/33096/serbia-celebrates-statehood-day.htm
*****
If you would like to get in touch with me, Aleksandra, please feel free to contact me at heroesofserbia@yahoo.com
*****
Posted by Aleksandra