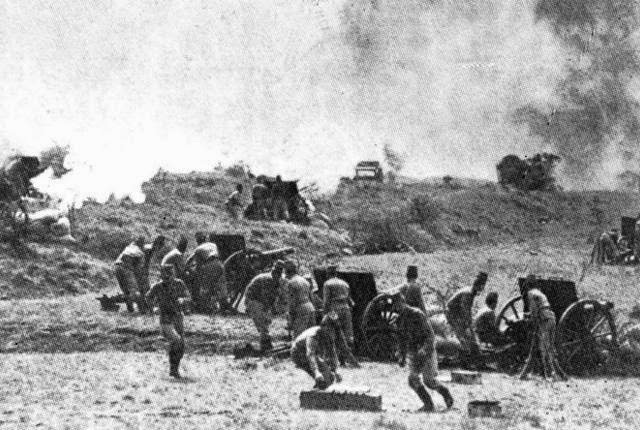 inserbia.info
December 2, 1914: Serbian Victory at Kolubara
As Austria-Hungary’s determination to crush Serbia was the immediate cause of the Great War, most observers expected the Dual to annihilate the small Slavic kingdom, still exhausted from the Balkan Wars, within a few weeks of the outbreak of hostilities. Instead the scrappy Serbs amazed the world by scoring a string of defensive victories, humiliating the Hapsburg armies and tying down hundreds of thousands of troops sorely needed on the .
After the first Austro-Hungarian invasion was decisively defeated during the Battle of Cer Mountain from August 15-24, 1914, the Austrian commander, Oskar Potiorek, regrouped in preparation for another offensive while the Serbs conducted harassing attacks across the frontier along the Sava and Drina Rivers, including incursions into Austrian Bosnia, with scant success in the Battle of the Drina from September 6-October 4.
By mid-October Potiorek’s troops had secured bridgeheads across the Drina River, while chief of staff Conrad von Hötzendorf scraped together wherever he could find them, laying the groundwork for a renewed Hapsburg offensive in the autumn. In early November the Austro-Hungarian Fifth and Sixth Armies, together numbering around 450,000 troops, launched a pincer movement against northwestern Serbia, defended by around 400,000 Serbian soldiers in three main armies and two smaller army detachments.
Rather than simply wait for the blow to fall, however, Serbian chief of the general staff Radomir Putnik staged a fighting retreat, drawing the enemy deeper into central Serbia, where autumn rain turned primitive roads into mud, disrupting the Hapsburg supply lines and forcing the armies to widen the arms of the planned pincer. According to Josef Šrámek, a Czech soldier in the Hapsburg army, food was already scarce and disease rampant as early as October, exacerbated by corruption and indiscipline:
"Hunger every day, too little bread available. Dysentery is spreading among us. I am expecting packages from home – in vain – feldwebels [sergeants] stole them. The same happens to rum and wine! Officers are drunk. They push us around and beat us with sticks… Being in the army is getting tougher day by day… We even lack water."
Nonetheless, encouraged by the apparent crumbling of Serbian resistance, Potiorek pressed forward, capturing the strategic town of Valjevo on November 15 and forcing the Serbs to abandon their capital, Belgrade, and relocate to the central Serbian town of Niš on November 29. Šrámek noted that this gave a much-needed boost to morale: “With great enthusiasm we think we have now won the war; there are even some prophets saying we will be home by Christmas.”
As jubilant crowds in Vienna celebrated each new Hapsburg advance, the situation looked increasingly hopeless for the Serbs – but now Putnik, running out of options, decided to make a last stand along the Kolubara River, where mountainous terrain would afford his troops would a defensive advantage, and the enemy forces would have to approach over relatively open ground from the north. At the same time the lines of supply and communication between the diverging Austro-Hungarian armies were stretching to the breaking point. Šrámek recounted:
“We slept in the fields – hungry, freezing exhausted… No bread – there is one portion for ten men. We stay without meals for three days…" 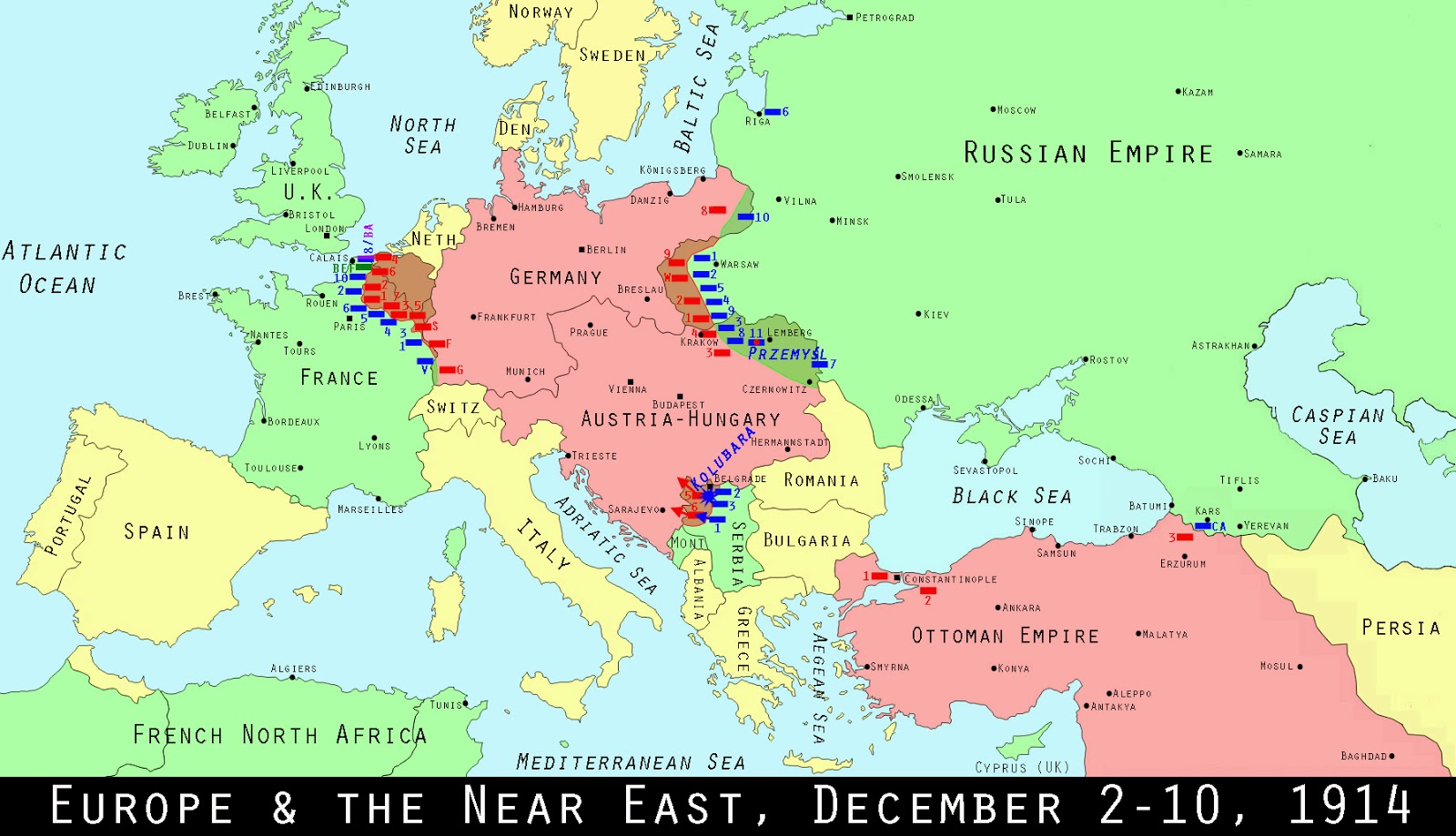 However Putnik’s skillful management of the Serbian retreat prevented Potiorek from coming to grips with the First Army, aided by the latter’s decision to allow his own troops to rest. Meanwhile crucial supplies of artillery shells from the Allies began arriving from the south, where they were disembarked in the Greek port of Salonika and hurried north to the Serbs by rail. With his ammunition replenished, Putnik decided to stake everything on a surprise counterattack (top, Serbian artillery at Kolubara).

The sudden Serbian assault on December 2, 1914 took the enemy completely by surprise; running low on ammunition and supplies themselves, the over-confident Hapsburg forces were overstretched and had also failed to establish strong defensive positions. The first day’s attack succeeded in pushing the Austro-Hungarian troops back a few miles, and more importantly restored the Serbs’ flagging morale.

On December 3 they resumed the offensive, before the enemy had a chance to reconstitute their defensive line – and now, just as suddenly as they had advanced, the Hapsburg forces simply collapsed. By December 6 they were in headlong retreat, abandoning Valjevo on December 8 and Belgrade on December 14, while the Serbs captured tens of thousands of prisoners. Šrámek wrote in his diary:

"It is all in vain! We’ve been firing for the 4th day now. The Serbs are all around. For 4 days now, we’ve had no food, no officers, and we’ve kept the last hill. Today I was in a real rain of bullets 3 times. The unit is destroyed; each of us has run in a different direction. Grenades crackle in the snow around me. I am dead tired… Suddenly the Serbs were here. “Bacaj puski!” [“Drop your guns!”]

Any hopes Šrámek and his fellow Slavic soldiers they may have held of gentle treatment from their ethnic cousins, the Serbs, were quickly shattered:

"The Serbs robbed us immediately. I didn’t want to give them my bag. A Serb hit me with the butt end of his gun, and I fell down… The first thing our brother Serbs did was take off our coats and put them on themselves. The same with our shoes. All that had any value – underwear, blankets, watches, money – everything comes in handy for them. All we ate in 3 days were 3 halves of a bread loaf. We slept on the snow and saw the first swamps the first two nights."

In strategic terms the defeat at Kolubara was yet another disaster for the hapless Hapsburgs, coming on top of their earlier humiliation in Serbia in September and their repeated defeats in Galicia, and further confirming the opinion of the German general Erich Ludendorff, fairly dripping with disdain: “Ally? Ha! We are shackled to a corpse!” As 1914 drew to a close it had become clear that Austria-Hungary was entirely dependent on Germany for its continued existence – and the Germans weren’t shy about taking control of the situation, stirring Austrian resentment against the high-handed behavior of the “arrogant Prussians.”

What a great nation, SERBS. god save the SERBS, they deserved it. Even now, 100 years after, they need your help.