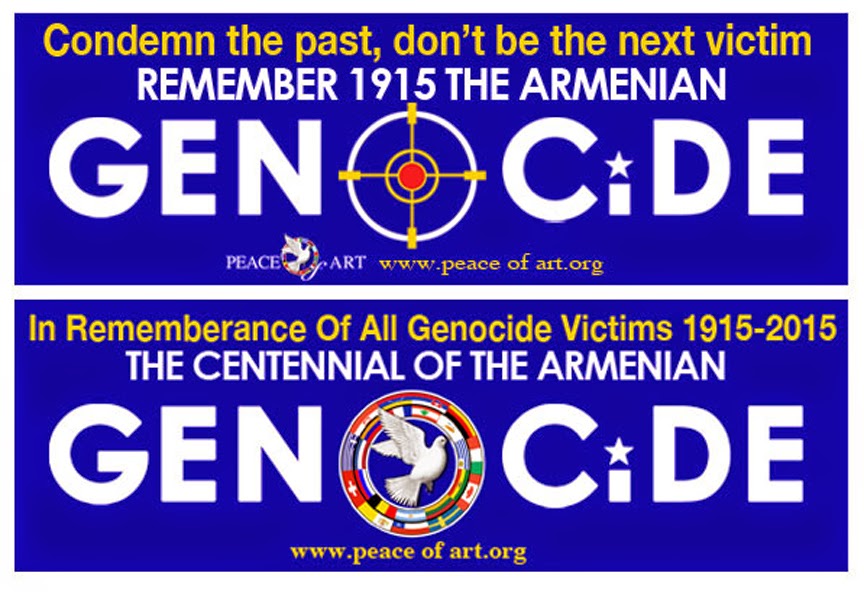 
Aleksandra's Note: Thanks to the efforts of those around the world who care about the crimes committed against Christian men, women, and children, more and more attention is being given to the Armenian Genocide of 1915, during which 1.5 million Christians were murdered by the Islamic Turkish Ottoman Empire during and after World War One. Other Christian victims included indigenous Christian Assyrians and Greeks subjugated by the Turks.

It is an understatement to say that crimes against Christians, which are again on the increase now, 100 years later, need to be, and must be, given the official attention they deserve.

The Serbians, their fellow Christian Orthodox brothers and sisters, are rightfully giving the victims of the Armenian Genocide their due, for the Serbians know well what it was like to remain Christians in the lands occupied for centuries by the Islamists.

Below is an excellent example of the media attention that is being given to this important anniversary.

“We will name this evil for what it is — genocide,” said the Rev. Laura Everett, executive director of the Massachusetts Council of Churches, the state’s main ecumenical organization, who preached the sermon. “Because . . . nothing short of this name will suffice, because nothing short of this truth can set us free.” 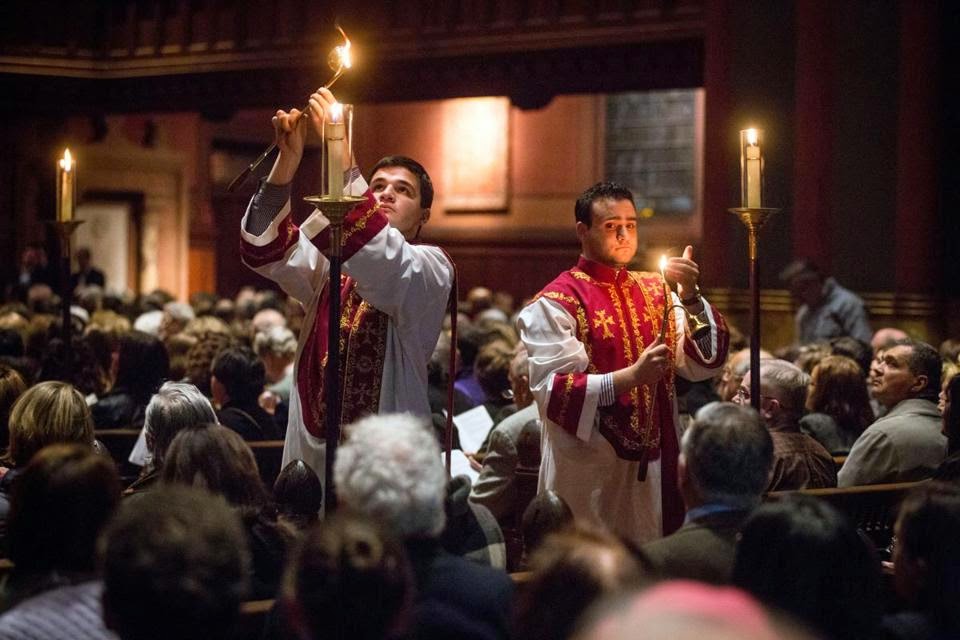 Candles were lit at the Armenian Genocide services held at Trinity Church in Boston.
Aram Boghosian for The Boston Globe.
Small white luminaries, set in rows on the steps of Trinity Church in Copley Square, glowed in the cold wind.
Written on some were names: Marnos Kashmanian. Flora Asatur. Yervant Samoorian.
On others, messages to the dead: “My dearest mother, genocide survivor, matriarch to our family, our memory of you lights the way to our future.”
Still others bore messages to the world. “It was genocide.” “Justice.”
Christian leaders from various traditions led an Armenian vespers service Thursday evening at Trinity Church in Copley Square to commemorate the 100th anniversary of the killings of 1.5 million Armenians by Ottoman Turks.
The service — whose leaders included Orthodox, Roman Catholic, Protestant, and Armenian church leaders, and whose speakers included representatives of the Jewish and Muslim communities and Governor Charlie Baker — underscored widespread solidarity in Boston with the Armenian community in its long quest to gain recognition of the massacres as a genocide.
“We will name this evil for what it is — genocide,” said the Rev. Laura Everett, executive director of the Massachusetts Council of Churches, the state’s main ecumenical organization, who preached the sermon. “Because . . . nothing short of this name will suffice, because nothing short of this truth can set us free.”
The Rev. Krikor Sabounjian of the Armenian Church of the Holy Translators in Framingham said in an interview that the diverse gathering was a momentous occasion for the state’s diaspora, which is the second largest in the nation.
Mary Johnson of the Islamic Society of Boston Cultural Center told those gathered, “The Armenian people will be born again to new peace, the peace of knowing the world speaks your name and remembers.”
President Obama, like his predecessors in the White House, has refused to recognize the mass slaughter as genocide for fear of offending Turkey, a key US ally at a time of extraordinary turmoil in the Middle East. Turkey says that the number of Armenians killed has been greatly exaggerated and that the killings were part of a civil war between Muslim Turks and Christian Armenians, with victims on both sides.
Though they are deeply disappointed in Obama, Armenian-Americans say they have drawn comfort from Pope Francis’s use of the term genocide to describe the killings.
Cardinal Sean P. O’Malley, archbishop of the Roman Catholic Archdiocese of Boston, was unable to attend Thursday’s service because he was in Chicago attending the funeral of Cardinal Francis George. But in a letter he sent, read aloud by Bishop Arthur Kennedy, he wrote: “No more denial.”
Referring to the ongoing persecution of Christians in Syria by Islamist extremists, he said the world owed it to the victims of the Armenian genocide “to stand against all genocide and crimes against humanity, especially those being perpetrated right now in the same lands, against our same faith.” 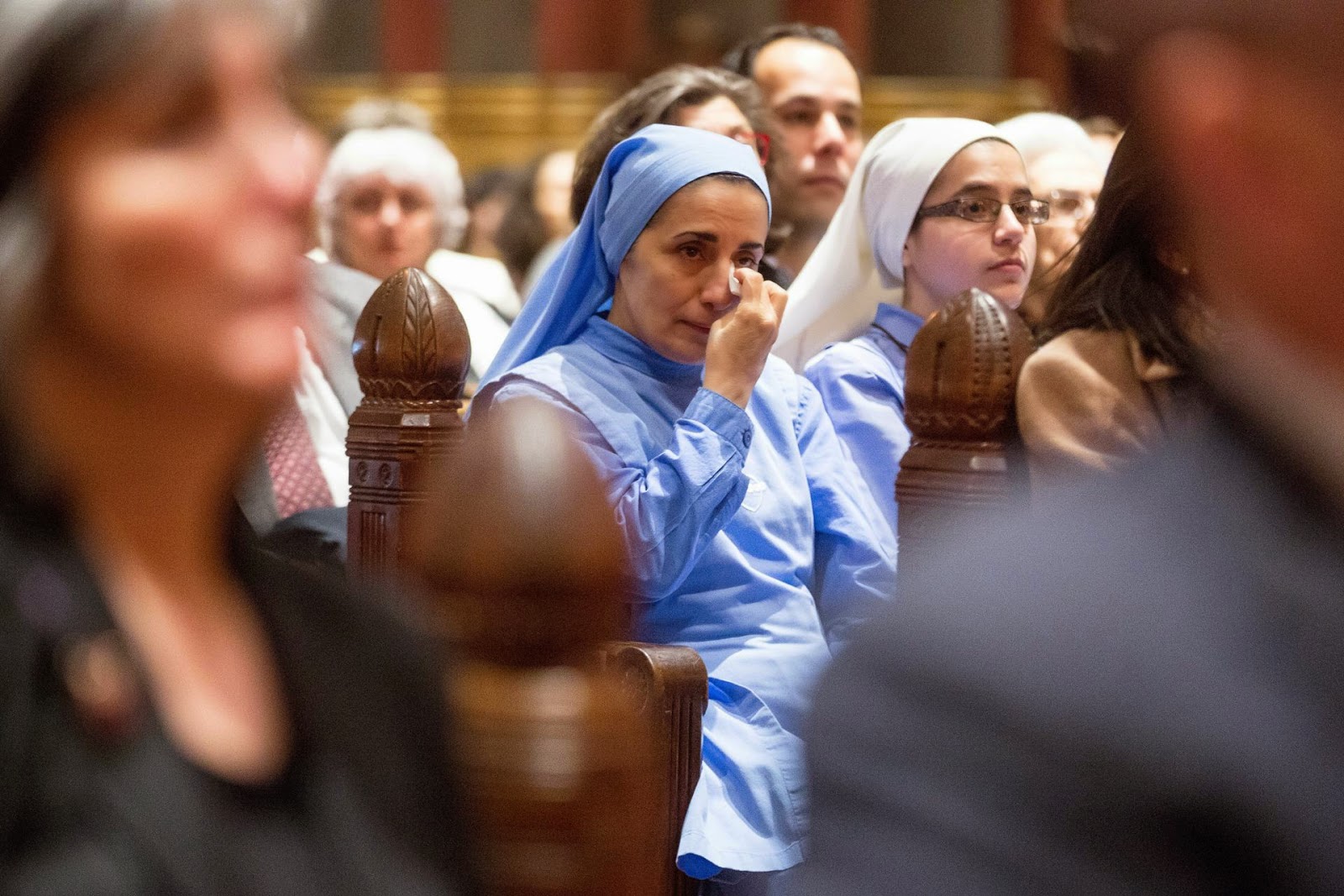 A woman wiped away tears at a service at Trinity Church in Boston
on Thursday [April 23, 2015].
Aram Boghosian for The Boston Globe.
Archbishop Jean-Clement Jeanbart of the Melkite Archdiocese of Aleppo, Syria, spoke poignantly of the death and destruction the people of his city have suffered. “I ask the world to pray with me that the war will end in Syria as soon as possible, and that . . . those who left will come back,” he said.

The offering at Thursday night’s service will be sent to aid people of all faiths in Aleppo who are suffering the disastrous effects of civil war, said Anthony Barsamian, one of the organizers.

Earlier Thursday, the Armenian Church canonized the genocide’s victims at the Etchmiadzin Cathedral, its mother church in Armenia. It was the first time in centuries the church has created new saints.

James Kalustian, an archdeacon in the Armenian Church and a member of its highest advisory body, said the canonization means that virtually all Armenian-Americans in Boston are now descendants of saints. Most Armenians arrived in Massachusetts as a direct result of mass killings, he said.

Heather Apigian Krafian, 49, pondered how the canonizations would affect her life and faith after a service at St. Stephen’s Armenian Apostolic Church in Watertown on Thursday. As it ended, she and other parishioners heard the church bells pealing, echoes of bells ringing around the world in simultaneous recognition of the new saints.

She was thinking of her grandfather, Hagop Madoian, who was 11 when his parents were driven away to their deaths. In a journal account in 1923, Madoian wrote that he was overjoyed when he found his 9-year-old sister in an orphanage some time later. Mariam, lack-eyed, rose-cheeked, and clever, cried day and night for her parents.

One day, she excused herself from breakfast and went back to sleep. He saved her portion of soup for her, but hours later, he discovered she had died in her bed. He buried her himself in a neighboring churchyard.

“We couldn’t explain the illness,” he wrote. “No words could describe the grief I felt.”

Krafian takes some comfort in knowing that, now, little Mariam is a saint. And one day, she believes, Turkey will have no choice but to acknowledge what really happened.

“You can only lie for so long,” she said. “Eventually, the truth comes out."


Lisa Wangsness can be reached at lisa.wangnsess@globe.com.