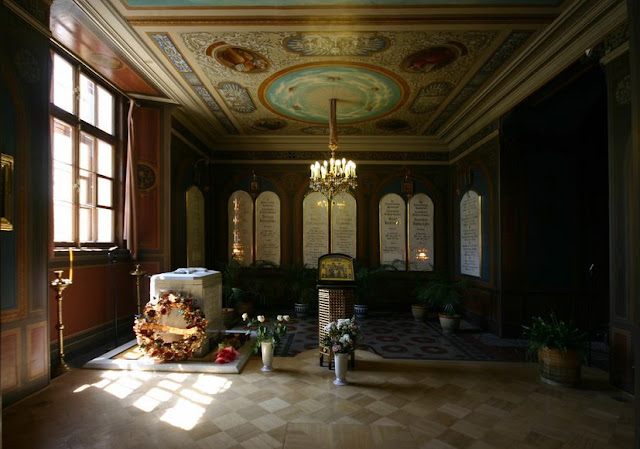 St. Catherine Chapel in the Saints Peter and Paul Cathedral, St. Petersburg
The following is a compilation of three articles published today by the Interfax News Agency in Moscow. It supplements the six articles published yesterday. The text has been further edited by Paul Gilbert @ Royal Russia.
On Wednesday evening [Sept. 23, 2015], specialists of Russia's Investigative Committee had completed extraction of samples of the remains of members of the Russian royal family buried in the St. Catherine Chapel of the SS Peter and Paul Cathedral in St. Petersburg, Interfax has reported.
"The investigators have completed all necessary tasks, having taken everything they might need and left about 18:10. The Museum [of St. Petersburg History] was working as usual. Tomorrow, no acts will be carried out," the source said.
For the time that the exhumation was carried out, the St. Catherine Chapel - where the remains of Nicholas II and Russian Empress Alexandra Feodorovna are buried - was partly closed for visitors. Note: I can also confirm that the chapel was closed on Monday, September 14th, the day I visited the SS Peter and Paul Cathedral during my recent visit to St. Petersburg - PG
According to an Interfax correspondent who reported from the scene, the museum complex is operating normally.
Later on Wednesday, samples taken from Tsar Nicholas II, his wife Alexandra and from the bloodstained uniform of Alexander II, Nicholas's grandfather, had been delivered to Moscow to conduct new DNA examinations as part of the inquiry into the murder of the royal family by revolutionary Bolsheviks in 1918, Vladimir Solovyov, a senior investigator and criminologist of the Russian Investigative Committee's central criminology department, told Interfax.
"Indeed, the samples arrived yesterday. Examinations will begin today," he said.
Russian Investigative Committee spokesman Vladimir Markin said on Wednesday that the Investigative Committee had resumed the investigation of the death of members of the family of the last Russian tsar and their entourage. Markin said that additional studies will be conducted to confirm the authenticity of the remains of Tsesarevich Alexei and Grand Duchess Maria that are currently stored at the State Archives.
The Russian Orthodox Church and the House of Romanov still dispute the authenticity of the remains of the royal family discovered near Ekaterinburg and buried in St. Peter and Paul's Fortress.
The Russian Investigative Committee does not doubt the authenticity of the remains of Tsar Nicholas II and his family, and additional examinations will be conducted following a request from the Russian Orthodox Church, committee spokesman Vladimir Markin has said.
"The recent resumption of the criminal inquiry is not an attempt to revise the earlier received evidence and the established facts. Rather, it is an exclusive need to additionally examine the newly uncovered facts, which has been requested by the Russian Orthodox Church," he said.
Russian investigators "have never doubted that all of the found remains belonged to the royal family and their entourage," he said.
The Investigative Committee has asked world renowned genetic scientists to help with these examinations, and the most advanced technologies and equipment will be used, Markin said.
"Furthermore, all of these investigative measures and examinations will be conducted within the shortest possible time," he added.
© Interfax / Paul Gilbert @ Royal Russia. 24 September, 2015
http://www.angelfire.com/pa/ImperialRussian/blog/index.blog/1470690/exhumation-of-romanov-remains-completed-dna-samples-sent-to-moscow/
*****
If you would like to get in touch with me, Aleksandra, please feel free to contact me at heroesofserbia@yahoo.com
*****
﻿
Posted by Aleksandra