Aleksandra's Note: The Legacy of Kosovo, which has long preceded the history of this 21st century and the last millennium, has run through the blood of all wars that the Serbians have had to deal with subsequent to 1389, and this legacy is ingrained in the Serbian Soul.

I'm very pleased to see that "Kosovo's forgotten victims" - meaning the Serbian victims of very recent history - have indeed not been forgotten. 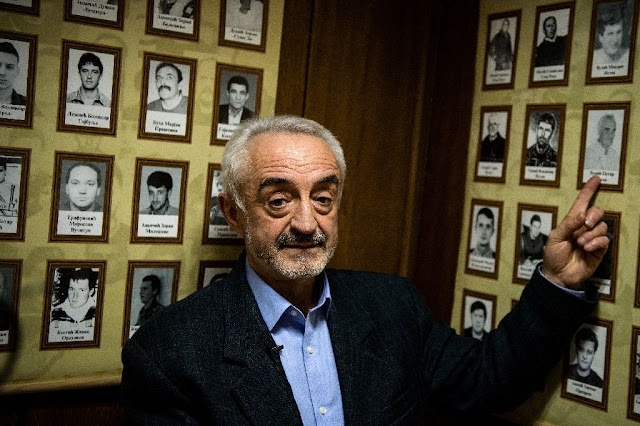 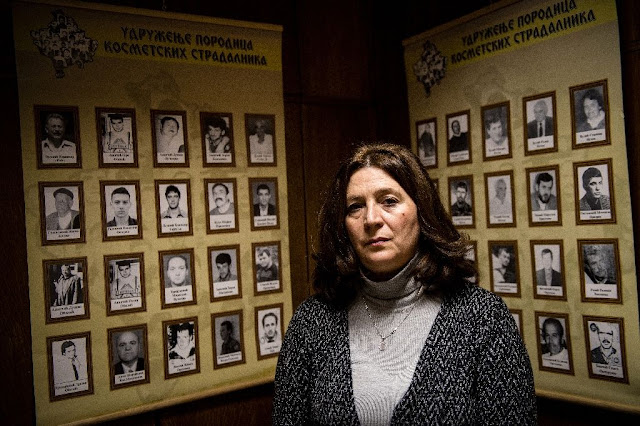 Natasa Scepanovic leads an association for the families of Serbian victims of the Kosovo Liberation Army in the 1990s (AFP Photo/ANDREJ ISAKOVIC)
Nineteen international judges were appointed this month to the tribunal, which will try crimes allegedly committed by the Kosovo Liberation Army (KLA) in its fight for independence from Serbia, a conflict that left 13,000 dead.
Global attention has long focused on the mass killings and atrocities by the Serbian forces of the late strongman Slobodan Milosevic.
An 11-week NATO bombing campaign pushed the troops out of predominantly ethnic Albanian territory in 1999, and Kosovo declared its independence a decade later.
But alleged crimes committed by the Kosovo rebels, against Serbians but also against Roma and fellow Albanians deemed to be collaborators, have attracted relatively little scrutiny.
"No one has been adequately punished or justly condemned" over missing family members, said Natasa Scepanovic, who leads an association for families of Serbian victims.
"We have been discriminated against since the beginning of our sad story," she told AFP.
The claims were raised in a 2008 book by Carla del Ponte, the ex-pro secutor of the International Criminal Tribunal for the former Yugoslavia (ICTY).
A few years later, a Council of Europe report reiterated the allegations against several former KLA leaders, some of whom had become high-ranking Kosovo officials.
"There cannot and must not be one justice for the winners and another for the losers," Dick Marty, a Swiss prosecutor who led the council's inquiry, said in his report.
In particular, he accused Hashim Thaci -- now the president of Kosovo -- of leading a mafia-style network involved in assassinations and unlawful detentions.
Thaci has denied the accusations and said he is willing to cooperate with the tribunal, telling AFP last year that he had "nothing to hide".
- 'Last hope' -
The Council of Europe report noted the disappearance of almost 500 people, including about 400 Serbs, after Milosevic's forces withdrew from Kosovo in June 1999, when the KLA had "virtually exclusive control on the ground".
Some of the possible indictees at the new court in The Hague, including former KLA commanders Ramush Haradinaj and Fatmir Limaj, have already been tried and acquitted by the ICTY.
The United Nations and NATO-led forces in Kosovo wanted "to promote short-term stability at any price, thereby sacrificing some important principles of justice", the report said.
NATO forces were not yet on the ground when Serbian troops started to withdraw, leaving a security vacuum in which retaliations against Serbian civilians went unchecked.
But seven relatives of Marinko Djuric, including his father, decided to stay in Istok, in northwestern Kosovo.
"Since they were not responsible for any crime, they believed themselves to be safe," Djuric, now 58, told AFP in Belgrade.
But the situation worsened, and an evacuation was promised for June 29. No one saw them again.
"Six were killed, the seventh disappeared and we know nothing of his fate," Djuric said.
For Beriana Mustafa, a 35-year-old ethnic Albanian journalist, the Hague tribunal is her "last hope".
Her father, Xhemajl Mustafa, was an adviser to the former Kosovo president Ibrahim Rugova and a political opponent of the KLA, was assassinated at the entrance of his apartment in 2000, after he wrote articles critical of the rebels.
If the court "fails to establish responsibility, I will close this chapter of my life without waiting any longer," she said.
- 'I can't tell you' -
But many Serbs from Kosovo remain sceptical about what the court can achieve.
"We are considered responsible for the conflict, and our victims are second-class victims," said Misko Deverdzic, 42, whose father disappeared after being taken to a KLA interrogation centre in March 1999.
Deverdzic left the area, but later returned to ask an Albanian neighbour for information about his father.
He said he was told, "I know what happened but I can't tell you".
The tribunal will have to work with patchy evidence, as some witnesses have died, while others may struggle to remember exact details of the events.
Security is also a concern: During previous trials of KLA members, several witnesses disappeared or died in suspicious circumstances.
The court, which operates under the laws of Kosovo, was set up in The Hague to ensure that witnesses are protected.
"My message is that no one should doubt that this is a very serious undertaking," David Schwendiman, an American who is chief prosecutor of tribunal, said in September [2016].
https://www.yahoo.com/news/serbians-seek-justice-kosovos-forgotten-victims-034546233.html?soc_src=social-sh
*****
If you would like to get in touch with me, Aleksandra, please feel free to contact me at heroesofserbia@yahoo.com
*****
Posted by Aleksandra