CONGRATULATIONS TO MR. NEBOJSA ZIVKOVIC, the new President of the Serbian National Defense Council of America 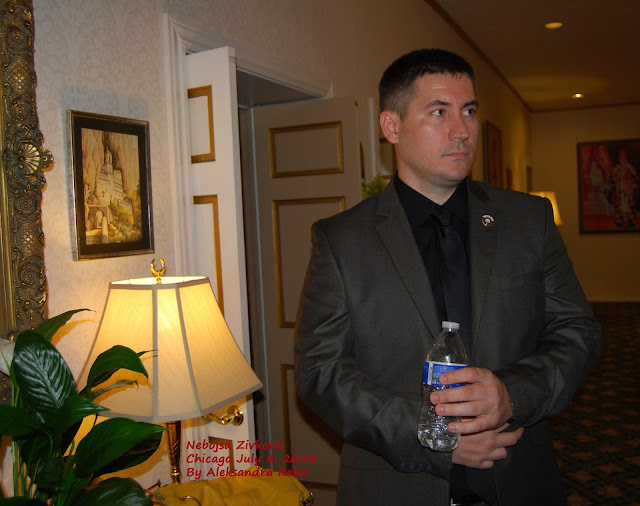 Mr. Nebojsa Zivkovic, the new President of the Serbian National Defense Council
of America, at the wake of the longtime president of SND, Slavko Panovic,
in Chicago July 8, 2015. Photo by Aleksandra Rebic.
Aleksandra's Note: I'm so thankful that the torch of the Serbian National Defense Council of America was passed from longtime president Slavko Panovic to Mr. Nebojsa Zivkovic during the June 27-28, 2015 weekend of the SND annual Congress and Vidovdan commemoration, while Slavko was still alive. Slavko Panovic became, and would remain, the honorary president of the SND organization. Though Slavko's tenure as president lasted over two decades, his tenure as honorary president would only last a few days. The following Friday, on the night of July 3, 2015, Slavko Panovic, a great Serb patriot and American, died, leaving behind a legacy that will ensure that he will remain remembered for always.
One of the many thoughts that passed through my mind in the days following the news of Slavko's death was how good it was that the presidency of Serbian National Defense had been passed on while Slavko was still alive, that the choice of the man who inherited that position had Slavko's blessing, and that the choice appears to be a good one, indeed.
Mr. Nebojsa Zivkovic has some big shoes to fill now. All indications point to a bright future. As a friend said in Serbian "Nebojsa Zivkovic je pravi covek, odlican izbor!" (Nebojsa Zivkovic is a good man, a real gentleman, an excellent choice.") Other impressions include that he is always willing to help and is willing to work with other organizations. That's so important, because what Serbs need more than anything else is a unity of purpose and action, and unity amongst themselves. Nebojsa, as my friend said so succinctly, is the right man for the job.
To my knowledge, I've only met him once, and that was at the Sveta Gora Funeral Home in Chicago for the wake of his predecessor Slavko Panovic. Nebojsa left a great first impression - soft spoken, respectful, thoughtful, humble, and a real gentleman. He also strikes me as a man who will carry Serbian National Defense into the future and continue the good work and noble purpose of an organization that celebrated a full century of its existence last year on June 28, 2014. It's my sincere hope that we Serbs will give Mr. Zivkovic our support.
From one Serbian to another: SAMO NAPRED! / ONWARD!
Sincerely,
Aleksandra Rebic
July 2015
***** 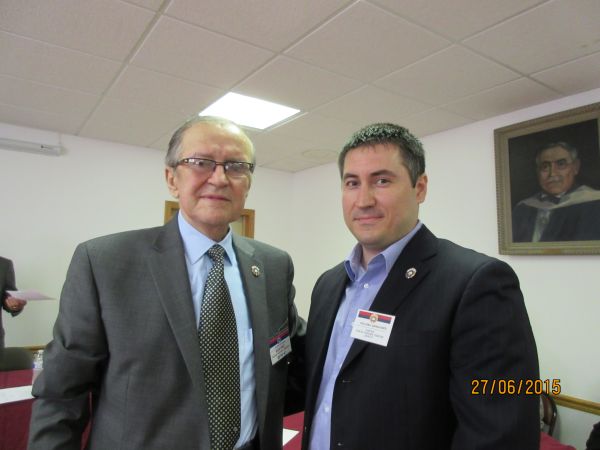 Slavko Panovic, the honorary president of the Serbian National Defense Council
of America and Nebojsa Zivkovic, the newly elected president of SND at the Vidovdan SND Congress June 27, 2015. Photo courtesy of SND.
*****
If you would like to get in touch with me, Aleksandra,
please feel free to contact me at heroesofserbia@yahoo.com
*****
﻿
Posted by Aleksandra